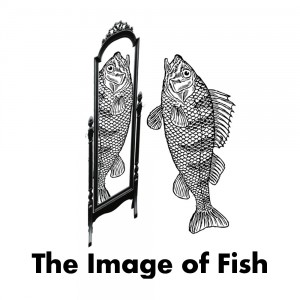 The logo has a few things going on:

1) Marshall McLuhan has this quote that says we don't know who discovered water, but we're pretty sure it wasn't the fish. I think that as far as theology goes, God is all around and we're swimming. That makes it hard to see sometimes.

2) The mirror is there to remind us that while human-made things (including theologies) can reflect the world around us, they rarely get the whole picture and it often doesn't look quite right. Objects may be closer than they appear.

3) The fish is also a symbol of Jesus, who, some sources suggest, was pretty significant in the development of Christianity.

4) I like the word cornobble, which is an archaic English word meaning to strike with a fish. This logo has a fish in it. Good deal.