Once again, Bo Sanders from Homebrewed Christianity has got me going… This time it came in the form of his post "The Problem: with Peter Rollins," particularly the following bit: 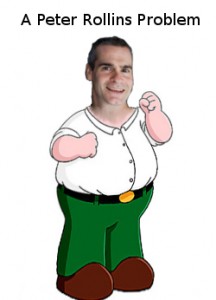 So when I was listening to Pete the other night make some astoundingly insightful points about televangelist and revival preachers I realized the importance of the medium and the message. Here was one guy, standing up front, we were all facing him and listening to him – and he was a little bit smarter/further ahead than we were. It’s still the problem of the one person at the front of the room with all the ideas/answers.

Now, that is not Pete’s fault. He is utilizing the medium to get out the message. But it did convict me that the architecture, furniture, and facilitation need to be different so that the medium matches the message if what I am concerned about is community and authenticity.

From there I went off on a wild ride, hitting on McLuhan, my Made as Makers film project, and some thoughts I have about leadership in the Emergent Church (Movement). As usual, the vid is below. In it I mention the following:

Oh, and please forgive me on two counts in this vid:

(a) my hyperbolic categorization of "didactic lectureship"  as a tool for oppression and patriarchy. I mean, come on… that's over the top.

(b) the self-indulgent weirdness of me wearing my conference-friendly "The Image of Fish" shirt to record a TIoF video. I forgot I had it on and how meta it would get.

This is the second part of a short piece I used as a pre-semester reading when I was co-teaching a seminary theology 101 course. Part 1 is here, and next are three pieces on creeds.

For Christians that understand God to have been enfleshed in the person of Jesus of Nazareth, there exists a clarion call not only to discipleship, but to a model of God that is grounded in the spiritual and physical realities of this world. A world that is not philosophically divided into spirit and matter, but that is both in simultaneity. God's expression is – and has been – in the particulars of situations, communities, and collective sorrows and joy. And does articulating God by means of our human experience bring about its own challenges?

Absolutely. But what other choice is there? It is only through our brokenness and human sense that we experience anything. The acknowledgement that, in fact, our experience heavily influences discussions on the nature of God, opens up the possibilities of theological discourse. When this is accepted, theology moves from a scientistic discipline of proof and proposition towards a passionate exploration of how God is seen to be ever-renewing all that is, in our lives, our homes, communities, and all across this wounded world. In other words, a God out of context is not much God at all: it is a poor sort of articulation of God that is so far removed from life that it does not have bearing upon human actions and understanding. If our explication of the nature of the Divine somehow places God fully beyond human access, then God becomes available only beyond life. If, conversely, it is the case that God's presence is at least somewhat experiential, then our models and articulations of the Divine ought to provide for this to be the case.

What we know of God is contextual, personal, and ever capable of change. As we study theology we immerse ourselves in a living stream of interpretive tradition. I agree with Tripp Fuller that, "in an unfinished universe it is unreasonable to think a theology is finished." We study not a series of facts about God, but a series of interpretations and articulations developed by certain people at certain times in certain places. Human notions of God are ever-changing, even if God is not. So how then are we to understand our role as theologians? What is our task if we know that we too are grounded in our own context and can't get out of it to articulate God fully and factually complete? I have an answer that I'll offer via analogy, of all things, to chemistry.

Asked what H2O is, most people will answer water. They are correct, and there is more to the story than their response. Formed the other way around, "H2O" as an answer to the question "What is water?" is not wholly correct.

Imagine two molecules of water, each with two atoms of hydrogen associated to a larger atom of oxygen. What we have discovered is that even in a container of "pure" water, the reality is that a collection of H2O molecules do not remain simply a collection of H2Os. Instead, they begin to interact with one another, resulting in one of the two oxygen atoms taking a hydrogen atom from the other, an event which chemists notate as 2 H2O <–-> H3O+ + OH− and refer to as the "self-ionization" of water. Essentially, even though water is H2O, that is, two hydrogen atoms and one oxygen atom, water does not ever actually exist in a pure H2O form. Water is constantly in a state of resonance, transition, and relation, an oscillation in process between H3O+ and OH−. So too is God: somewhere between transcendent and immanent; personal and eternal; and any number of other seeming contradictions. By extension then, our task as theologians is not to name God as a fixed God that is and always will be, but to describe God in a such a way that captures some of the Divine nature as it is in the process of becoming something other than what we have named it.

This is not to say that God is becoming something ungodlike any more than it is to say that water is not water-like simply because we always thought it was “just H2O.” The function of our theology is to provide a sketch of how it is that God is at some middle point of becoming something more than we thought it was, but not so far afield that it is unrecognizable. Two molecules of water do not self-ionize into wombats: they stay water-related, just further from the idea of “pure” water than we first thought. There is a sense of continuity between H3O+ and OH− such that it makes sense to call a mixture of those things H2O, even though what we have discovered challenges our sense of what exactly that wet stuff is. The study of theology should do this as well: push us beyond that which we had previously contemplated, enabling us to better name God in our context for our people in our place and time.

Understanding and/or relating to some aspect of the Divine does not entail understanding and/or relating to the entirety of God. If you ask my wife if she knows me, she is sure to say yes, and you would think nothing of it. Of course she knows me. And yet there are thoughts I think, things I see, and stories I have heard that she has no knowledge of. That doesn't mean she does not know me: it means than I am more than that which she knows. I see no reason why this should not be the case with God as well. We articulate God's qualities – and thought about sin, redemption, end-times, the function of the church, etc – not to limit or ascribe finitude to that which we know is profound and immense, but as an offering and invitation to others that they might respond in kind, lending their voices to a conversation which is both the echo of ancient words and the renewal of current hope.

As we scientifically name water as H2O because that is the state in between its two poles of existence, so too can we conceive of God. It's just that while water "self-ionizes" into two distinct parts, each of which is qualitatively identifiable, quantifiable, and fixed, God seems to be formed of more parts than we can name. Yes Father, yes Son, yes Holy Spirit, and yes also Alpha and Omega; Love and Light; and Living Water and Word. Yes, yes, and infinite-becoming yes.

Why theology? Because as people of faith and Christian leaders, part of our work entails leading, and while we may have some vision of what we want to end up with, knowing how to get there – and how people have tried to get there before – certainly helps that effort. Put another way, a map isn't useful for getting you from “here” to “there” if you don't know where “here” is. Theology is the study of human reflection on God and it is our “here.” How we go forward will be up to us.